Meeting the needs of students with significant behavioral concerns is a challenge that is faced by many educational systems today. In order to enhance the support provided to students and their educational teams, CAIU examined Behavior Imaging technology as a means to better serve students with autism and behavior challenges.

Two studies were conducted between 2011, and 2012 with the goal of increasing the overall effectiveness of behavior interventions with students demonstrating severe or challenging behaviors. Behavior Capture and Behavior Connect provided a unique asynchronous telemedicine system for communicating, analyzing, and interacting around behavior data collected in homes or schools. Both studies were based on preliminary studies showing that data collection was improved by using Behavior Capture and Behavior Connect for increased accuracy in data collected. The platform also provided members of the team with the opportunity of reviewing behavioral footage in order to accurately identify and tag components of the ABC contingency while recording comments for future reference. 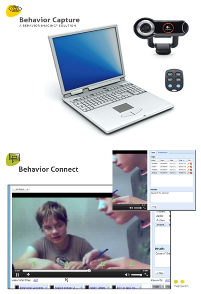 During the Year 1 pilot, two Autism Support classrooms run by CAIU used both Behavior Capture and Behavior Connect with two quantitative targets: 1) measure the impact on the timeline of the FBA/PBSP process; and 2) measure cost savings associated with usage. Four sets of student data were compared gathered during the pilot were then compared to historical FBA/PBSP data for CAIU students. The timeline from start of FBA data collection to implementation of the PBSP with fidelity was reduced, staff were able to address behavioral issues from a remote location rather than having to travel to the actual classroom location which saved money as well as reducing travel time.

In the Year 2 study the focus of this data collection revolved around an individual student with increasing levels of aggressive behaviors which resulted in his placement being changed to Instruction Conducted in the Home (ICH) in December 2012. Behavior Capture and Behavior Connect were then used in combination with principles of Applied Behavior Analysis to conduct a Functional Behavior Assessment in order to develop and implement a Positive Behavior Support plan beginning with the first round of ICH.

How to Ensure HIPAA Practices
Scroll to top